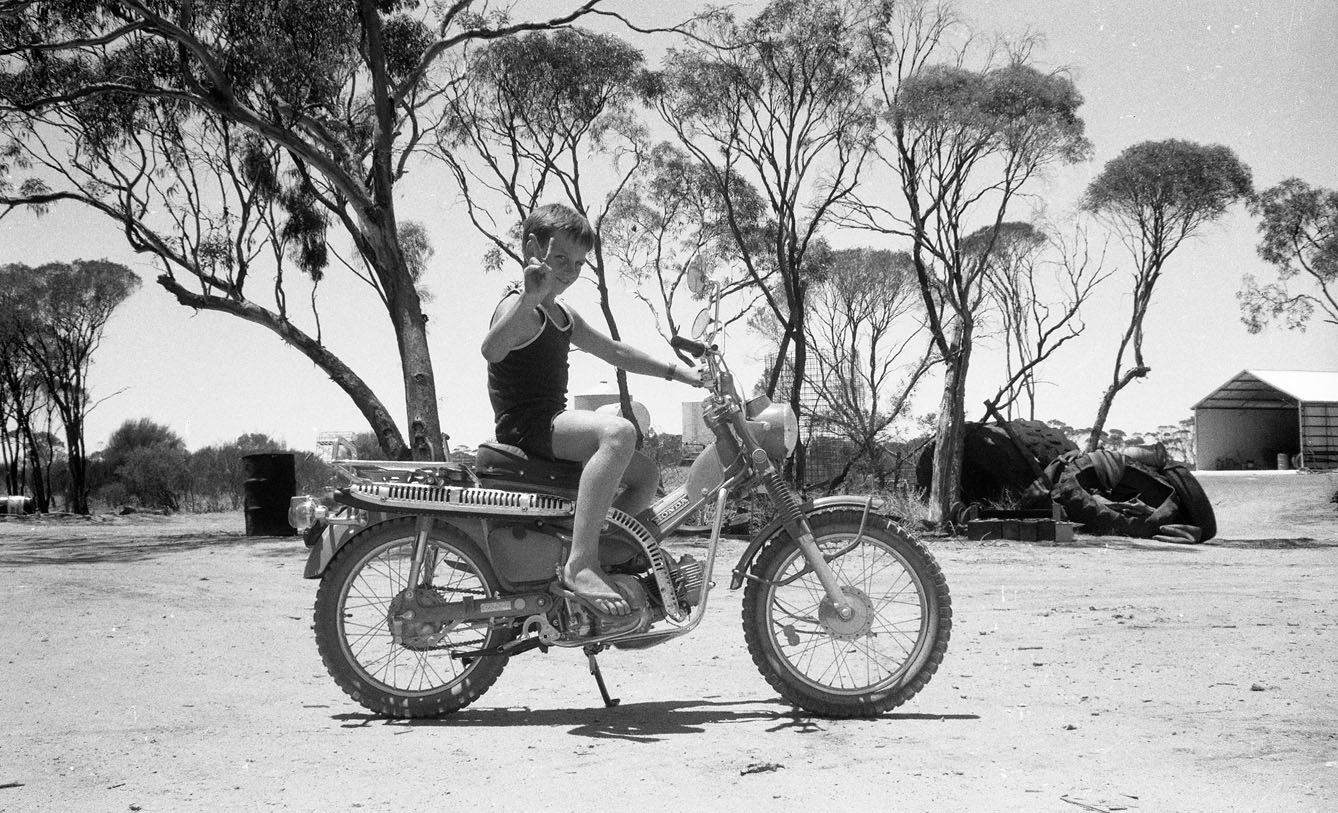 Andrew grew up on a wheat farm north-east of Kalannie, in a remote corner of the wheatbelt. In those free and easy days, farm kids started driving at a very young age. From farm utes and motorbikes, to large tractors and heavily-laden trucks – he drove them all. It was a great platform for developing driving skills, and he credits this early exposure for his love of driving and his skills.

Motor sport had always been an interest, especially rally. Both his parents had dabbled with Targa Tour events in a street car, and he was a regular visitor to Wanneroo Raceway. While a poor student at university, Andrew joined the WA Sporting Car Club and attended a driving school and several tuning days, sharing a friend’s Ford Escort. As much as he wanted to race, he couldn’t afford it.

As a bulletproof 23 year old, Andrew bought a Suzuki GSX 750 motorcycle. One day after a university exam, he and a couple of motorcycling friends headed out of the city for a ride in the country, to let off some steam. The front wheel let go on a freeway ramp, and in the collision with the barrier, he broke his right arm very badly, as well as his left leg. The leg was able to be pinned, but there was significant nerve damage to his arm. The neurosurgeon determined that it could not be repaired, and his arm was amputated above the elbow.

It wasn’t long before he regained his confidence, and found that driving a car one-handed was achievable. Andrew was invited to try flying an aircraft, and that turned out to be doable as well, and he started flying lessons in the late 80s. It took the development of some assistive technology to make this simpler. Andrew uses a special clasp that plugs into his prosthetic arm and holds the yoke. He flies a number of different types of light aircraft, and is now a part-time flight instructor.

By luck he stumbled upon a motorkhana come-and-try day at the Centrepoint Midland parking lot. A very generous club member named Jim Newell allowed Andrew, a one-handed stranger, to drive his Mini Special – a championship winning car, no less. Andrew joined the WA Motorkhana Club, where he experienced some wonderful generosity – a club member named Andy Wallace shared his motorkhana car, and Andrew competed in a number of club events and the State Championships.

Andy and Andrew went on to buy and share a kart in the early 90s, which they raced in the Clubman category with the Tiger Kart Club at Wanneroo and Cockburn. Number 76 was an Arrow kart, and it served the pair well, but sharing a kart was never going to last. Andrew purchased a new CRG Kali Kalifornia, and raced Clubman for about a year. Within that time, Andrew became very proficient and competitive, finishing in the top few in the field on most occasions. One of the regular competitors he bumped wheels with a youthful and talented Garth Tander.

Like many of his peers in the IT industry, Andrew was lured overseas in 1994. He lived and worked in Florida where there is a strong karting fraternity and a competitive racing scene. He shipped his kart over from Australia, and was quickly competitive, finishing runner up in the Gulf Coast Kart Club championship for the year in the Yamaha class. Unfortunately, work took him away from Florida and karting was put on hold.

After returning to Australia in 2001, Andrew began competing in triathlon, in the physically challenged category. He competed in the ITU Olympic-distance World Championships in Edmonton Canada, Cancun Mexico, Queenstown New Zealand and Honolulu USA. He also competed in 6 Ironman triathlons in Australia and Hawaii before 2010. Unfortunately, this prevented any motorsport activity.

In 2010, Andrew obtained a Commercial Pilot’s Licence and Instructor Rating, and began teaching others to fly. He also took on the role of President of the Royal Aero Club of WA. There was no time for anything else! However, after 10 years in that role, it was time to return to his first passion, motorsport.

Resurrecting a dream, Andrew purchased a Radical SR3 in late 2020 from Arise Racing which was modified by the mechanical team with a paddle shifter that can be operated one-handed. Andrew obtained his race licence and made his Radical race debut in November 2020.

Andrew is very happy to be part of the Arise family, where he feels very welcome and supported.

When Andrew started karting he never saw another person with a physical challenge in motorsport, though he heard about a gentlemen who rallied in Perth with one hand in the 80s. Andrew feels that it is really great to see how welcoming the sport has become now, and how many people are overcoming their physical constraints.

He is looking forward to getting off his P plates soon and hopes to compete a full season at Wanneroo in 2021.